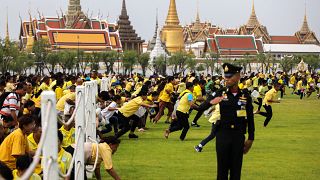 A sea of Thais dressed in yellow scrambled at speed on Thursday (May 9) towards the grounds where a royal ploughing ceremony had just been held, hoping to lay claim to as many leftover sacred rice grains as possible.

Two oxen were led around the ceremonial ground nine times during the event, as a ceremony chairman threw grains into the air so they fall into the freshly-overturned earth.

The number nine is considered a very lucky number in Thailand, where it is pronounced "Gao" which rhymes with a word meaning to move forward or progress.

This year, the royal oxen ate rice and grass, and drank water, suggesting the year will be filled with enough water and bountiful grains, food, fruit and meat.