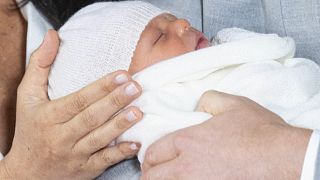 Prince Harry and Meghan Markle looked delighted as they showed off their newborn to the world.

Prince Harry and Meghan Markle looked delighted as they showed off their newborn to the world.

The couple decided to eschew the recent royal tradition of posing for photographs with their new baby hours after the birth, leaving the world's media and royal fans waiting for a first glimpse of the boy, who is entitled to both British and American citizenship.

They instead posed with their new son at Windsor Castle on Wednesday, two days after Meghan had given birth.

The newborn child of the Duke and Duchess of Sussex has not yet been given a name, but bookmakers have James, Alexander, Albert, Philip, and Arthur among the favourites. Other suggestions include Spencer, which was the surname of Harry's late mother, Princess Diana.

The infant is seventh in line to the British throne and is the eighth great-grandchild of 93-year-old Elizabeth II, Britain's longest+reigning monarch.