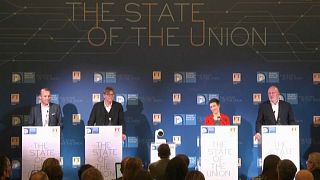 The leading candidates to become the president of the next European Commission have clashed over Germany’s support for the creation of an EU army.

With just three weeks to go elections for the European Parliament, four candidates for the continent’s top job went head to head in a debate at the European University Institute in Florence. German conservative Manfred Weber backed Chancellor Angela Merkel’s ambition for a permanent multinational armed force. But socialist candidate Frans Timmermans said a European army was not coming any time soon, arguing Europe would be better off focussing on economic cooperation.

Although Europe’s leading populist parties did not accept an invitation to participate in the debate, their shadow hung over proceedings.

Timmermans hit out the approach to refugees from Italian Deputy Prime Minister Matteo Salvini and Hungarian Prime Minister Viktor Orban: ''What reconnects us with the fundamental values of Europe is making sure people who flee war and persecution have a safe haven in Europe and no longer die in the Mediterranean. What I find difficult to understand that Mr Salvini today goes to Mr Orban today, ‘We are friends, your solution is the right solution'. Mr Orban is the one that has prevented us from finding a solution.''

For the liberals Guy Verhofstadt argued that the European Union needs far-reaching constitutional reform: “Today the European Union doesn't exist really. It is still a confederation of nation states that is mainly deciding by unanimity and that is always acting too little, too late when something is happening, for example the financial crisis at the other side of the Atlantic ocean. So that means that in the next five years it is not about ‘Can we change a little bit of this or a little bit of that?’ - there will be a time slot of five years to really change this nature, this character of the European Union and make it a real one."

The Green's Ska Keller said the focus should be on the needs of future generations: “Let's go to vote taking into account the future of the children, of the grandchildren, of the younger people who can't go to vote. And they gave us a very clear signal: they go to the streets in thousands and thousands in Rome, all over Italy, all over Europe, all over the world, because they are saying they also want to have a planet to live in."

Euronews’s Elena Cavallone told Good Morning Europe that with the rise of challenger parties, the existing blocks in parliament may need to forge new alliances to obtain a majority.

Watch Elena’s report in the video player above