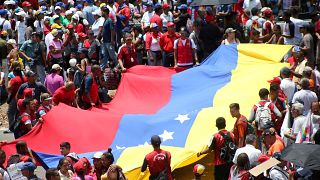 Juan Guaido rallies people to carry on with street demonstrations

Venezuelan President Nicolas Maduro has claimed victory in a TV address to the nation and said his rival, opposition figurehead and National Assembly chief Juan Guaidó failed in his latest attempt to take over the presidency. Guaidó on the other hand insists Maduro has lost control of Venezuela’s military and asked the people to keep on protesting after thousands came onto the streets on May day.

Juan Guaidó has called for an escalation in the demonstrations and suggested a general strike in the country today, in the hope of forcing President Maduro out of office. Last night he said ‘they thought they could suffocate our protest and they failed. We will remain in the streets until Venezuela is free’.

Meanwhile Maduro denied earlier reports that he was about to flee the country. He has also denounced the United States for orchestrating a coup and added ‘those involved would be punished’.

On Wednesday, a woman was killed and many protesters injured in clashes with the security forces in Caracas.

The Venezuelan crisis has also heated up tensions between the United States and Russia. Secretary of State Mike Pompeo said ‘the US could take military action’ to solve the problem. In a TV interview yesterday, President Trump said the United States is ‘doing everything we can do, short of, you know, the ultimate’.

Sergey Lavrov, Russia’s foreign minister, told Pompeo that America's influence over Venezuela was ‘destructive and a violation of international law.’

Watch an interview with a Venezuelan analyst in the player above