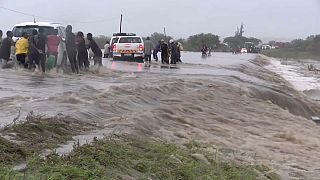 Kenneth caused storm surges and winds of up to 280 kilometres an hour.

The flooding situation has been worsened by the cyclone arriving at the end of the rainy season, when river levels were already above their normal levels.

Gemma Connell, Head of Office for the United Nations Office for the Coordination of Humanitarian Affairs for southern and eastern Africa told Euronews:

"Assessment teams have been out over the last few days, ready to go and assist people if water levels do rise further over the next 48 hours.

"It's already been a very difficult operation with flood waters coming in every day, usually in the afternoon.

"We've made good progress in getting emergency shelters out to people, but we're still in a race against time."

The United Nations has pledged $10,000,000, but Ms McConnell said this is nowhere near enough:

"We urgently need the international community to give generously to the people of Mozambique."