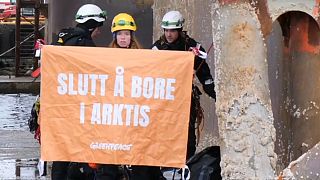 Activists climb aboard rig to protest drilling in Norwegian Arctic

Four activists from Greenpeace climbed onto a rig to protest against oil and gas drilling in the Norwegian Arctic.

The rig is due to drill a well in the Equinor-operated production license 859 in the eastern part of the Barents Sea, some 435 kilometres (270 miles) northeast of the coast of continental Norway.