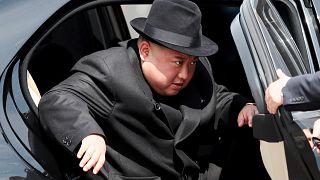 But in the United States, coverage of the two leaders' summit in Vladivostok has been overshadowed by a Washington Post report which claims that North Korea asked for two million dollars from the U.S. before freeing student Otto Warmbier.

Warmbier was a University of Virginia student who was sentenced to fifteen years in jail for allegedly trying to steal a poster in Pyongyang. He died six days after being released.

NBC News's Senior International Correspondent Keir Simmons told Good Morning Europe that the report is likely to have an impact on American perceptions of North Korea.

"The trust in North Korea is not very strong in the United States anyway," he said. "This story is going to make it even more difficult for trust to be built."

Watch Keir Simmons’ report in the video player above