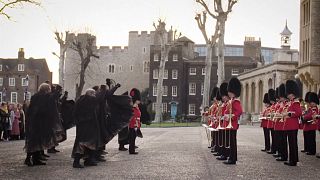 Tourists who visited the Tower of London were treated to an unusual "Game of Thrones" theme on Tuesday.

The Coldstream Guards played a version of the series' theme tune, while the actors performed with swords.

The crowd waiting for the traditional melody of "The Standard of St. George March" were surprised to suddenly hear the soundtrack of "Game of Thrones".

The final season of this popular series will be on air this April 15.