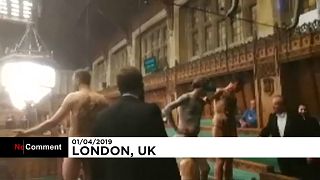 Naked truth? Climate activists cause a stir during Brexit debate

A group of semi-naked climate change protesters created a stir in Britain's parliament on Monday (April 1), pressing themselves up against the glass screen of a public gallery overlooking the chamber while MPs attempted to debate Brexit.

As members of parliament started yet another day of lengthy debate on how or even whether Britain should leave the European Union, around a dozen protesters stripped to their underpants to show slogans painted on their backs, including "Climate justice now".

The incident lasted around 25 minutes; some glued their hands to the glass and had to be removed by police, who later said 12 people had been arrested for "outraging public decency".

Hundreds of ultra-Orthodox men protested in Jerusalem on Thursday against the obligation to register for Israeli military service.