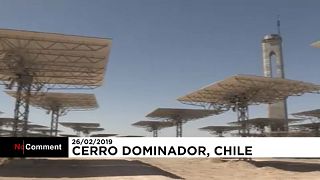 Latin America's first thermosolar plant is being built in Chile

In northern Chile, the first thermosolar plant of Latin America is springing up in the middle of the Atacama Desert.

The plant, which technology allows to produce electricity all day long unlike other forms of renewable energy, consists of a 250-metre tower surrounded by thousands of giant mirrors.

Cerro Dominador is the symbol of the ambitious energetic transition launched by Chile, which aims at having 100% of its energy matrix clean for 2040.