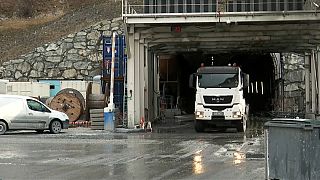 The troubled high-speed rail project between France and Italy has hit another delay - the Italian Prime Minister has put construction tenders for the scheme on hold.

Their government partners, the League, still support it.

The TAV is a joint venture between Italy and France aiming to link Turin and Lyon via a 58km (36-mile) tunnel through the Alps.

It is expected to halve the travel time between the two cities to just two hours. The tunnel would also make it possible to travel from Paris to Milan in around four hours, down from nearly seven.

But on Friday, France's Transport Minister Elisabeth Borne said the European Commission offered to increase its share to 50%, leaving France and Italy to cover 25% each.

The rail line has been a continual source of contention within Italian politics.

Supporters argue that it would take millions of cars and lorries off the road and drastically cut greenhouse gas emissions in the region.

But opponents say costs will be too high and the money would be better spent on upgrading existing roads and bridges.

An Italian government report last month concluded that the tunnel would be "very negatively profitable" and lose €7bn by 2059. But the methodology of its findings has been criticised.