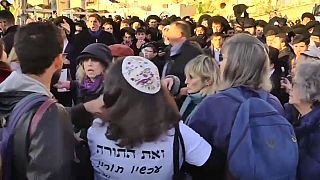 Scuffles eripted between police and protesters in Jeruslam on Friday after thousands of Ultra-Orthodox Jews attempted to prevent a liberal Jewish women's group from praying at a key holy site.

Women prayed at Jerusalem's Western Wall on Monday to mark the 30th anniversary of the 'Women of the Wall' organization, which also falls this year on International Women's Day.

The Jewish women's group holds monthly prayer services at the Western Wall, a remnant of the biblical Temple compound and the holiest site where Jews can pray.

Under Orthodox Jewish practice, only men may wear prayer shawls and skullcaps, and most Orthodox Jews insist that only men should carry a Torah scroll.

The more liberal Reform and Conservative streams of Judaism, marginal in Israel but the largest denominations in the US, allow women to practice the same way as men do in Orthodox Judaism.