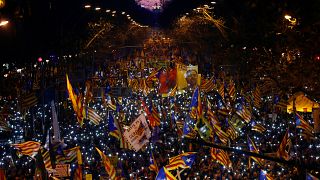 Four people have been arrested and dozens injured in Barcelona as protesters clashed with riot police over the ongoing trial of 12 Catalan separatist leaders in Madrid.

Thousands of pro-independence campaigners went on general strike on Thursday and took to the streets of Catalonia's capital with flags and banners.

Many of the protests were peaceful but in some areas, violence erupted.

One group of young protesters were restrained by police with batons and riot shields after some of them threw stones.

The strike was called by the CSC trade union, which supports the independence movement. It also called for better employment rights for workers in Catalonia.

The protest was timed to coincide with the ongoing trial of 12 secessionist leaders who were involved in a banned independence referendum in October 2017, and a subsequent failed declaration of independence.

The defendants face charges of rebellion, sedition, and misuse of public funds.

If they are found guilty they could each get up to 25 years in jail.

Supporters of the independence movement claim the defendants are political prisoners, but authorities in Madrid say they have acted illegally.

The Spanish constitution bans any of the country's 17 regions from declaring independence unilaterally.

The 12 defendants have always maintained the peaceful nature of the secession movement, and a spokesperson from the CSC union said he condemned "the police's actions against the right to demonstrate".

The trial began on February 12 at Spain's Supreme Court, under intense domestic and foreign scrutiny.

It was due to last three months, but the government is now hoping to speed up the process so the trial is over before a snap general election on April 28.