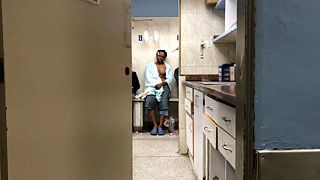 The economic and political crises of Venezuela are exacerbating an already devastating emergency. The public healthcare sector has all but collapsed: Venezuelan hospitals are suffering from shortages of basic supplies - from gloves and medicine to electricity and running water.

One doctor showed Anelise exactly how much the Venezuelan public health sector was in need. Jose (real name withheld to protect his identity) told her the shortage is ‘from the most basic items, gauze, gloves, serum, all the way through bigger items... For example, antibiotics are not always available. So if a patient needs a determined medicine, and if it’s not available here, you have to ask the patient to go looking for it. And maybe he won’t be able to find it so we’ll have to give him something else that’s not appropriate... and maybe this medicine will also run out... and so we often run out of the most basic things, to the bigger most complex instruments one needs for a surgery... like a heart surgery for example.”

This is an emergency the Venezuelan government doesn’t want us to see.

“Some 35 babies died here between November and December. There wasn’t enough medicine. The hospital doesn’t have baby formula." Jose explained. “There aren’t enough bottles and so the same bottle is shared between 30 babies... “

There are signs everywhere stating what the hospital lacks so that patients know what to bring. There are no nappies, disinfectant or towels. The hospital’s pharmacy is shut - and nearly empty according to doctors.

“When you’re in these kinds health-related of situations, you see the real crisis we’re facing. Here I had nurses tell me ‘I have lasi (antibiotics)’, I will trade it with you for some milk. That’s when you see how complicated things in Venezuela are that you trade medicine for food because you don’t have it. I have done it. I have traded food for antibiotics,” she said.

Healthcare in the country has become political but Nicolas Maduro denies there is a crisis. And says it’s part of the opposition’s plan to demoralise his administration.

Watch the full report in the player above.