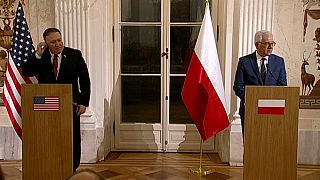 Summit on Middle East begins in Poland with poor attendance

The United States is leading a global summit on the Middle East in Poland today.

The summit - which is expected to focus on Iran - comes amidst US Secretary of State Mike Pompeo's diplomatic tour of central Europe.

Pompeo will be joined at the summit by American Vice President Mike Pence and Israeli Prime Minister Benjamin Netanyahu amongst others.

Marcin Zaborowski, Political Scientist and Senior Associate at the Visegrad Insight think tank told Euronews the summit was very much aimed at re-enforcing the US policy on Iran:

"That wasn't welcomed in most European capitals and that's why we see such a poor attendance at this conference.