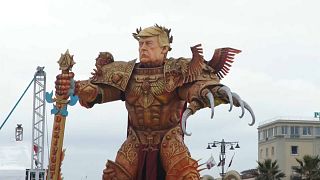 Thousands of people lined the streets of Viareggio on Saturday to watch a parade of satirical floats in the Italian city's annual carnival.

Renowned for its tongue-in-cheek take on contemporary issues, this year's parade focused primarily on world politicians and environment themes.

One float depicted US President Donald Trump as an emperor with Twitter symbols adorning the hilt of his sword.

Other floats tackled themes of bullying, with hyenas tearing through a book, and environmental issues by showing a whale swimming in plastic and "Mother Nature" as Snow White being poisoned with an apple.