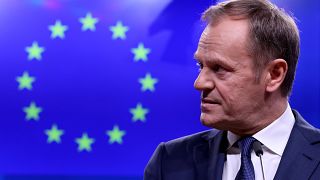 Donald Tusk’s “special place in hell” outburst has provoked an angry reaction from Brexit supporters in the United Kingdom.

On Wednesday the European Council President said: "I've been wondering what that special place in hell looks like for those who promoted Brexit without even a sketch of a plan of how to carry it out safely."

In the House of Commons, Conservative MP Peter Bone, said: “I don’t recall any president insulting members of this house, members of the government and the British people in such a way.”

In Brussels many have come out in support of Tusk.

As Theresa May arrived in Brussels on Thursday morning for crunch Brexit talks with Jean-Claude Juncker, Euronews' Darren McCaffrey asked the question that was on everybody's lips:

On Good Morning Europe, Euronews correspondents Meabh Mc Mahon and Tadhg Enright gave the latest reaction in Brussels and Westminster to the comments.

Watch that reaction in the player above.