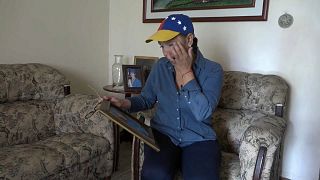 "It's very, very painful": stories of the Venezuelan exodus

In Venezuela, the pressure is mounting on embattled President Nicolas Maduro as international support pours in for self-declared interim President Juan Guaido.

A raft of European countries have recognised Guaido after the deadline they set for Maduro to call elections passed, and the Lima group which includes Canada, Brazil and Colombia reiterated their support for Guaido last night after a meeting in Ottawa.

But as the politicians debate over who will lead the country, millions of Venezuelan citizens are still leaving the country.

Faced with money that's not worth the paper it's printed on, food and medicine shortages, many are making the most difficult decision of their lives.

Nelly Pompa's son Miguel is one of the estimated three million Venezuelans who have already left the country. He lives in nearby Argentina, and sends money back to his mother as often as he can. But nothing can truly compensate for their separation.

“When we last saw each other, he was the happiest," said Pompa.

"He's my child, I miss him a lot. When I speak about him my eyes tear up. It is very painful. Very painful."

Others are only just now dealing with the choice to leave. Andrea Fonseca just collected her last pay cheque from her waitressing job and will be leaving shortly, also for Argentina. She made the difficult decision after she had to borrow money to buy her mother's medication.

Watch some stories of the Venezuelan exodus in the player above.