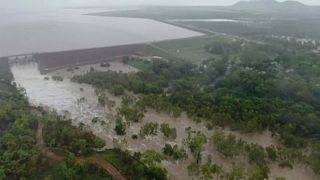 Flooding in and around Townsville, Australia continued on Sunday, as the area was lashed by record rainfall, officials said.

The Queensland state premier, Anastasia Palaszczuk, told reporters in Townsville that the area was in "unprecedented times", with the city recording over one metre of rainfall in the past seven days.

Up to 500 homes have been flooded and the Bureau of Meteorology (BoM) warned of more rain and possible tornadoes forming, local media reported.