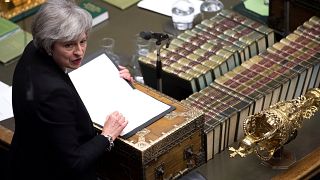 May to return to Brussels for alternative backstop arrangements

After a series of defeats, finally a win for Theresa May, of sorts.

The amendment backed by her government has passed Parliament, giving her a mandate to head back to Brussels.

She'll be asking the EU for changes to the Irish backstop in the withdrawal agreement she's already negotiated - the Irish backstop is the insurance policy that temporarily keeps Northern Ireland, and to a lesser extent the rest of the UK, in alignment with EU customs arrangements, in order to ensure there's no hard border in Ireland.

But according to a host of players on the EU negotiating team, she'll be arriving to a chorus of the word, "no."

Brexit Coordinator for the European Parliament Guy Verhofstadt reiterated that sense this morning when he discussed the EU position on the Irish backstop.

"I don't think there is room to do that, for the reason that the backstop is absolutely needed and the backstop is in the withdrawal, but there is a possibility to discuss the future relationship"

"The only point I want to make is to confirm that the EU institutions remain united and we stand by the agreement we have negotiated with the UK, never against the UK," he said in Brussels this morning.

Watch Woolfe on GME in the above player.