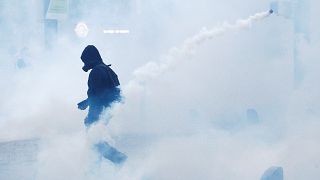 Anti-government protesters faced off with French riot police in Nantes on Saturday (January 26) smashing street billboards in the 11th weekend of unrest that has shaken President Emmanuel Macron's authority.

Thousands of "yellow vest" demonstrators also marched through Paris and other cities in action against the government, suggesting Macron has yet to defuse public opposition to some of his policies.

The protests were mostly peaceful across the country but there were sporadic clashes at the end of the Paris march at Bastille square, and incidents elsewhere around France, with a combined 69,000 people attending, down from an estimated 84,000 demonstrators across the country last Saturday.