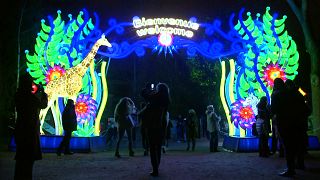 Dinosaurs, polar bears and elephants lit up amid rhinoceroses, tigers and panda-shaped lanterns at a light show in Paris's Jardin des Plantes that aimed to draw attention to the world's endangered species.

Paris sparkles with illuminations every holiday season, with installations in various locations around the city.

This year, the botanical garden in the heart of Paris becomes home to the brightly coloured animal-shaped figures reaching up to 15 metres in height, installed by the China Light Festival, a subsidiary of Sichuan Tianyu Culture, known for giant lantern displays to celebrate Chinese New Year.

The show's organisers want to warn against the pressure of economic development on nature and the survival of rare species.