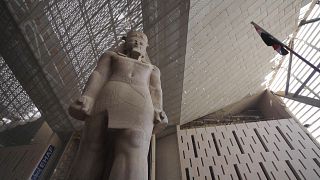 In the shadow of the pyramids of Giza, a project that could rival the scope of those ancient landmarks is nearing completion.

The nearly 500,000 square meter Grand Egyptian Museum will be the world's largest museum devoted to a single civilization – and a global team of scientists are bringing some the museum's oldest pieces back to life.

The museum will house the world-famous Tutankhamun treasure in its entirety, which was unearthed in 1922. Tutankhamun the Pharaoh reigned over the Kingdom of Egypt during its golden age, more than 3000 years ago.

Construction of the museum began in 2006 with funding from the Japanese government. Today, Japanese scientists are working in collaboration with Egyptian teams to restore many of the artefacts that will be on display.

“Tutankhamun is a major figure in world history,” said Yashushi Okada, Technical Chief Advisor at Tokyo University of the Arts. “Handling wood which dates back some 3350 years is very exciting for me.”