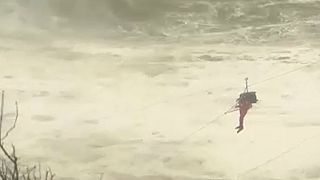 Sixteen crew members have been rescued from a cargo ship after heavy winds forced the vessel to run aground off Istanbul's coastal district of Sile on Wednesday (December 19).

The crew were stranded on board the 127-metre-long (417-ft) ship, dubbed Natalia and registered in the Comoros Islands. All have now been brought to safety, said a Reuters cameraman at the scene.

There were no reports of casualties or pollution caused by the incident, the governor of Istanbul's office said in a written statement.