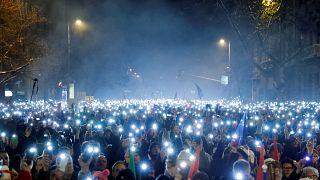 Around ten thousand people took to the streets of Budapest in one of the biggest demonstrations Hungary has seen for some time.

The demonstration Sunday afternoon was the largest in a series of marches that started last week, after the government has passed a new labour law, which has been labelled a "slave" law.

All opposition parties appeared on stage and promised that they would stand united to put pressure on the government.

“We've had enough," Independent MP Bernadett Szél said. “They are allowed to do anything and we are allowed to shut up and work until our nose bleeds.”

The change allows employers to ask staff to work up to 400 extra hours per year of overtime instead of 250. It could amount to another eight hours a week for some workers, equivalent to an extra working day.

“We'll go on strike with the teachers, the metal workers, the traders and everybody who is forced to work overtime or replace others, without being paid.” Tamás Székely, Head of Chemical Industry Workers' Union said.

Protesters then walked more than eight kilometres to the state television headquarters, where they vowed the demonstrations would continue despite the festive season.