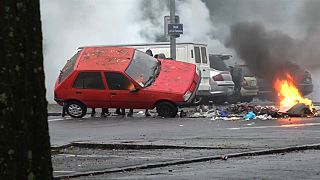 Students clash with police and burn car in Nantes

Students clashed with police in the French western city of Nantes on Thursday as anger grows in France over President Emmanuel macron's reforms and living conditions.

Students from the Gaspard Monge La Chauviniere high school blocked the school in the morning and clashes erupted later with the police. A group of students was seen setting fire to a car and firefighters were then called on the scene to extinguish it.

French authorities are worried that another wave of "great violence" and rioting will be unleashed in Paris this weekend by some several thousand 'yellow vest' protesters, an official in the French presidency said on Thursday.

Prime Minister Edouard Philippe announced on Wednesday that he was scrapping the fuel-tax hikes planned for 2019, having announced a six-month suspension the day before,

It comes as a desperate bid to defuse the worst crisis of Macron's presidency.