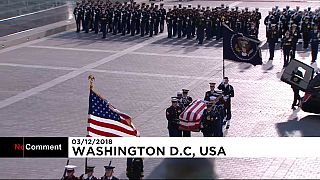 With hands on hearts, members of Bush's cabinet, lawmakers ,and Supreme Court justices honoured the 41st president as his flag-draped casket entered the Capitol Rotunda.

The Bush family, led by son and former President George W. Bush, accompanied the patriarch's body on the flight aboard Air Force One from Texas to Joint Base Andrews outside Washington, and then on a final trip down Pennsylvania Avenue to the steps of the Capitol.

The body of the Republican former president will lie in state at the Rotunda until Wednesday when a state funeral is scheduled at the Washington National Cathedral.

Mourners began lining up at the Capitol to pay respects to Bush, who died at his Houston home on Friday night at the age of 94, seven months after the death of his wife Barbara.