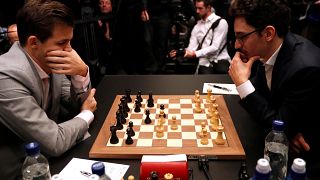 They've been stuck in a thrilling deadlock for much of the month of November— Magnus Carlsen and Fabiano Caruana have been trying to overcome the razor-thin margin of skill that divides them in order to grab the crown of World Chess Champion. So far, it's proved too difficult a task.

After 12 games, they're going to tiebreaker rounds later today at 16:00h CET— those tiebreakers could come down to a 9 minute showdown known as Armageddon.

Carlsen is the reigning, three-time world champion and was seen as the favourite going into the contest at the beginning of the month. Having now played 12 games against challenger Caruana, all 12 draws, some experts are wondering if he may have lost his famous nerve.

Even so, Carlsen is historically stronger in the fast chess format that will be played in the tiebreakers. In that format, he's currently ranked first in the world, and Caruana 18th. But the American challenger isn't to be underestimated. This is the first time a World Championship has been held to all draws in regulation time, a testament to just how close in skill the two men are.

They'll be facing off for the final time in this Championship in a soundproofed room in London in just a few hours.