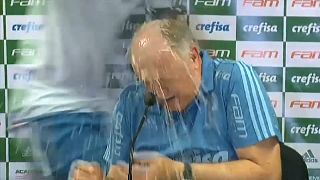 After leading Palmeiras to their 10th Brazilian league championship on Sunday (25th November), coach Luiz Felipe Scolari was drenched by his players in a press conference.

The title win comes only months after the former Chelsea boss returned to his home nation and was the club's second title in three years.

Australia face Argentina in knockouts, Mexico miss out on last-16

France will go through to the next round despite Tunisia upset