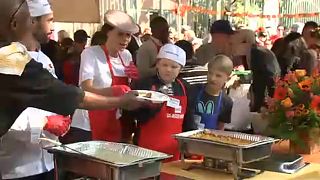 Kevin Hart, Pharrell Williams and Minnie Driver were among the celebrities who turned out on Wednesday to serve Thanksgiving dinner to the homeless in downtown Los Angeles.

The event on the city's Skid Row served a hot meal to more than 3,500 homeless men, women and children. The charity, established in 1936, offers a lifeline to those living in poverty or on the streets.

During the last year, the LA Mission has served 400,000 meals to those in need.