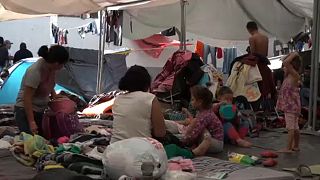 Many Central American migrants camped in Tijuana after crossing Mexico in a caravan attended a job fair organised by the Baja California state government.

Franciso Iribe Paniagua, Baja California Secretary of Labour, said the fair had been organised not just because of the "extraordinary flow" of migrants but for Mexicans as well.

The federal government has estimated the number of migrants in Tijuana could soon rise to 10,000.

Some locals have protested about the presence of so many migrants as tensions rise in the city.