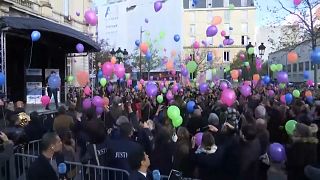 Balloons released in Paris to honour victims of 2015 terror attacks

Multicoloured balloons took to the sky above Paris on Tuesday in honour of the 130 victims of attacks on the Bataclan concert hall, Paris cafes and the national stadium in 2015.

The balloon release was part of a day of commemoration events for victims of the coordinated attacks, which the so-called Islamic State group claimed responsibility for.

Multiple, coordinated attacks were carried out across Paris on November 13, 2015, leading to 130 deaths — 89 of which occurred at the Bataclan.