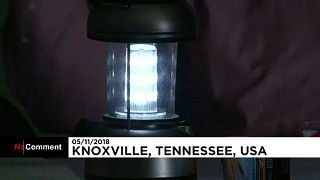 Votes are cast in darkness after power outage in Tennessee

Lanterns glowed inside a polling station in Knoxville on Election Day on Tuesday (November 6), one of nine voting locations in Tennessee where ballots were cast in darkness after early morning storms knocked out power.

Voting machines that ran on battery power were still running, but some polling stations had to use paper ballots after the lights went out.

Election officials said power to all polling stations was restored by noon.