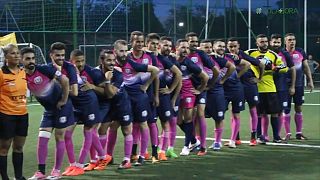 In Brazil, football has been mainly a straight guy's sport. But a new league is seeking to change that by providing a safe space for LGBT players and fans and helping to tackle homophobia at the same time.

Soccer is by far Brazil's most popular sport, with the most World Cup titles in history, but it is traditionally associated throughout Latin America with a culture of machismo, a game for straight men, rife with homophobic slurs.

To counter such an environment, LGBT soccer fans created their own league in response. LiGay started in 2017 and currently has 16 teams nationwide. Friday (November 2) and Saturday (November 3) in Sao Paulo they came together for a season-ending tournament.

LGBT fans of the game have raised the issue of homophobia in the sport with FIFA and while soccer's governing body has clear rules against discrimination on the basis of sexual orientation, activists say awarding the recent World Cups to both Russia and Qatar sends out conflicting messages.