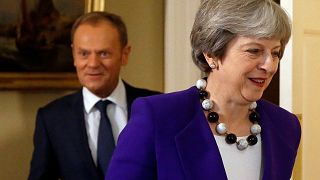 Donald Tusk: "No grounds for optimism" on Brexit negotiations

As EU leaders prepare to meet in Brussels tonight, European Council President Donald Tusk has said he has 'no optimism' that a Brexit deal will be reached.

Tusk said he will ask the UK's Prime Minister Theresa May ahead of the summit for "concrete proposals" on how to break the impasse that has hit negotiations.

Speaking last night, he said there is still "good will and determination" on both sides, but that May will need to bring "new facts" to the negotiating table.

The most recent talks - between the EU's Michel Barnier and UK Brexit Secretary Dominic Raab - broke down due to disagreement over the EU's proposed 'backstop' solution to the ongoing issue of the Irish border.

Under a backstop agreement, Northern Ireland would remain in the EU customs union and much of the single market - even after the UK leaves.

However, May has said she will never accept a border that would see Northern Ireland "carved off" from the UK's internal market, and has made assurances to staunch Brexiteers in her government that if a backstop is introduced it will be temporary.

Euronews spoke to Dr Simon Usherwood, of Brexit thinktank The UK In A Changing Europe, who said he believes the "real challenge" will be to get a deal approved by Britiain's parliament.

He said although some "technical agreements" are possible between the EU and the UK, internal political struggles within the UK will continue to frustrate the process.

May is under the constant threat of internal rebellions, from members of her own Conservative Party, and from Northern Ireland's Democratic Unionist Party (DUP) - which props up her minority government.

The DUP has repeatedly threatened to paralyse the government's domestic agenda - including blocking the upcoming Autumn Budget - if Northern Ireland's relationship with the EU is jeopardised.

Dr Usherwood said, as far as he is aware, the UK "doesn't have any new proposals to bring to the table", and predicted that this week's meeting will end in a stalemate - as did the last EU summit, in Salzburg in September.

"Partly because they're worried that a 'no-deal' might genuinely happen, but also to show the UK that they are prepared for the worst.

"As far as they're concerned, the UK will suffer a lot more from not agreeing something."

The EU27 had hoped to reach a provisional deal this week, before signing off on a final withdrawal agreement at a special Brexit summit in November.

There is less than six months to go until the 29th of March 2019, when Britain is scheduled to exit the EU.