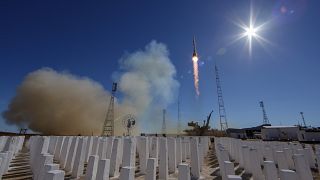 Russia has launched a criminal investigation after two astronauts were forced to make an emergency landing when the engine of their Soyuz rocket failed in mid-air.

US astronaut Nick Hague and Russian Alexey Ovchinin were on a mission to the International Space Station (ISS) when their booster rocket malfunctioned just 119 seconds after take-off.

The crew realised there was a problem when they began to experience a feeling of weightlessness - a sign that the Soyuz, which was travelling at 7,500km per hour, was falling back down to Earth.

An emergency escape system was activated, detaching the capsule carrying the astronauts from the rocket, and the capsule went into ‘ballistic descent’.

During a ballistic descent, the crew experiences far greater G-force - the force imposed on a body by rapid acceleration or deceleration - than during a normal landing.

Speaking to Euronews, Canadian astronaut Chris Hadfield said the descent would have felt "as if you threw a stone into a pond - it floats for a while, then it hits the thickness of the water and then you're really decelerated".

Hadfield, who once co-piloted the Soyuz, added: "They would have felt something in the order of six or seven times their weight. So they'll be crushed but that's how most space flights go."

Footage from inside the Soyuz capsule shows the two men being shaken around, with their arms and legs flailing.

After falling through the atmosphere for 34 minutes, the capsule landed 400km from the launch site - the Baikonur cosmodrome, in Kazakhstan.

Rescue crews, including paratroopers, helicopters and all-terrain vehicles, raced to the landing spot, and both crew members escaped unharmed.

Reid Wiseman, NASA's deputy chief astronaut, said Hague and Ovchinin "handled their procedures exactly as planned" and that they are "in great shape".

He said the spacecraft was at an altitude of 50km when the abort occurred - "just about on the boundaries of space".

ISS operations integration manager Kenny Todd described the incident as a "major anomaly" but said he has "every confidence" that Russian space agency Roscosmos will establish the cause of the malfunction.

Russia has reportedly launched a criminal investigation to determine whether safety regulations were violated during the rocket's construction.

Russia's Deputy Prime Minister Yuri Borisov said no further manned missions to the ISS would be launched until they "are certain that the entire situation guarantees safety".

He rejected suggestions the incident could harm Russia-US relations, saying both countries recognise that space is a "hi-tech industry, linked to risk".

The Soyuz MS-10 launch was scheduled to carry Hague and Ovchinin to the ISS for six months.

The head of Roscosmos says they hope to reschedule the mission for Spring 2019.