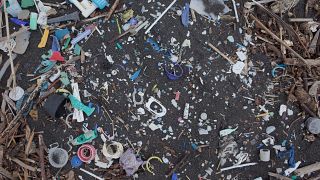 Ten times more plastic is washing up onto the shores of remote South Atlantic islands than a decade ago, according to new research published in the journal Current Biology.

The research shows for the first time, that plastic pollution on some remote South Atlantic beaches is approaching levels seen in industrialised North Atlantic coasts.

During the research cruises, the teams sampled the water surface, water column and seabed, surveyed beaches and examined over 2000 animals across 26 different species.

More than 90% of beached debris was plastic, and the volume of this debris is the highest recorded in the last decade, according to the report.

The research also points out that plastic even enters the food chain - it can be found in the tiny plankton and up to top predators.

Dr Barnes says that "understanding the scale of the problem is the first step towards helping business, industry and society tackle this global environmental issue,"

"I think there's a lot of public awareness now for the scale of the problem and the fact that it's not just about legislation, we ourselves have our own part to play," Dr Barnes said, speaking on Good Morning Europe.

Andy Schofield, biologist, from the RSPB, who was involved in this research said: “These islands and the ocean around them are sentinels of our planet’s health. It is heart-breaking watching Albatrosses trying to eat plastic thousands of miles from anywhere.

"This is a very big wake up call. Inaction threatens not just endangered birds and whale sharks, but the ecosystems many islanders rely on for food supply and health.”