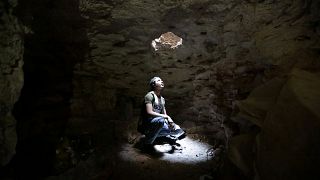 After days of shelling and bombing in Syria’s Idlib province, Bashar al-Assad’s Russian-backed forces are amassing on the frontlines of the conflict – and time is running out for civilians to leave the area.

The rebel-held northwestern province and its capital city are home to over 2 million civilians, many of them displaced from their homes in other parts of the country. For Assad, a rebel defeat in Idlib would break the last major stronghold of militarized opposition to his regime. His government has promised to “go all out” in their offensive, and many in Idlib will have no choice but to wait out the conflict.

“About half of the population of Idlib is made up of displaced people. They have experienced what displacement mean and have experienced carpet bombing before whether it was in Eastern Ghouta or in Daraa, or Eastern Aleppo,” Assaad al-Achi, Director of the charity group Baytna Syria told Good Morning Europe. “They know what to expect and how intense it can be once it starts.”

But for many civilians, the attack on Idlib promises to be different– for the first time, there doesn’t appear to be any place offering refuge from the conflict. Many had hoped an escape to Turkey would be possible, but with domestic pressure mounting on a Turkish government that has already accepted 3.5 million refugees, that route does not appear to be an option.

“The Turks have made it very clear that they won’t open their border. One option would be for some of them to go to the northeastern part of Aleppo province that was liberated from Daesh with the help of Turkish forces,” said al-Achi. “But that would require Turkish authorization for people to move there.”

The presidents of Iran, Russia and Turkey are scheduled to meet on Friday in an attempt to facilitate a diplomatic solution to the situation in Idlib. Turkish President Recep Tayyip Erdogan, whose government has opposed the regime of Bashar al-Assad since the beginning of the Syrian civil war, is hoping that a “serious massacre” can be avoided. Turkish officials are concerned that a mass exodus of refugees from Idlib could overwhelm their border if the conflict intensifies.

With a life in Turkey out of sight for the foreseeable future, options for real safety are thin.

“People could move to areas currently under control of the regime, but that would mainly be for people who don’t have any security risk– which is very minimal when it comes to Idlib,” said al-Achi. “Idlib is the last stronghold of the opposition, and it’s the area where most of the people opposing Assad have amased. Unfortunately we could be looking at human carnage should there be an assault on Idlib.”