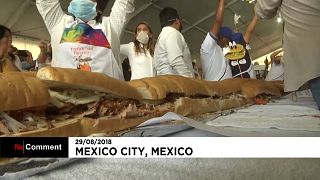 Mexicans gathered to break the world record for the longest "torta" sandwich in Mexico City.

The sandwich weighed 865 kilograms and measured 70 meters in length and set the Latin American record for the longest sandwich made of any kind.

The torta is a Mexican delicacy made using flatbread.

More than 60 ingredients were used in total including tomatoes, guacamole, onions and mayonnaise.

The annual event, which took place on August 29, aims to promote torta sandwiches.

This year marks the fifteenth in a row that Mexico has broken the Latin American record for the longest sandwich.