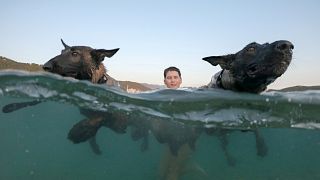 Canines and their owners took to a beach on the Adriatic coast in Croatia as part of the "Underdog 2018" race.

The combined swimming and running race, which was held in Banjol, Croatia, on August 28 saw 15 dogs of all shapes and sizes compete.

Bonnie, a small white 5-year-old mutt clinched the top spot, winning a two-day vacation at a campsite for himself and his owner.

Speaking after the competition, Bonnie's owner, Ervina Kriskovic-Pahlina, said: "My dog loves swimming a lot, and at first I thought he would be among the fastest here, but then when I saw all those large dogs in good shape lining up, I thought he would not stand a chance. But in the end, it turned out he was really faster than everyone else."

The event was organised by the owners of Monty's Beach Bar, a recently opened canine-friendly beach bar.

Owner of the establishment, Ruby Montanari-Knez, said that the race is "a way of raising awareness about how important pets are in our lives".

Montanari-Knez said that it is a way of "integrating everybody into the society" as well as encouraging people to "get active".

For canines that preferred treats rather than exercise, the race coordinators organised a competition involving the fastest eating and drinking of "ice cream" and "beer" suitable for dogs.