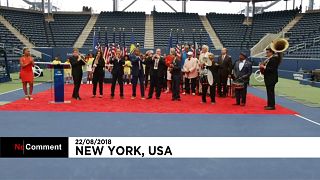 Watch: Louis Armstrong Stadium opens to the sound of jazz

The newly rebuilt Louis Armstrong Stadium opened to the sound of jazz music on August 22 in Queens, New York City.

The 14,000-seat stadium, dedicated to the iconic jazz musician Louis Armstrong, has become the second stadium in the USTA Billie Jean King National Tennis Centre to have a retractable roof.

The roof of the Arthur Ashe Stadium has been in operation for the past two years.

The 1,800 fans that attended the opening of the rebuilt stadium were treated to jazz music by a marching band led by musician Wynton Marsalis.

The Louis Armstrong Stadium represented the final instalment of a five-year $600 million (€520 million) upgrade to the renowned tennis centre, which plays host to the annual US Open Tennis Tournament.

Following the cutting of the ribbon, spectators managed to snatch a glimpse of the past, when tennis legend John McEnroe served on the court.

McEnroe joined his brother Patrick in a doubles match against Michael Chang and James Blake.