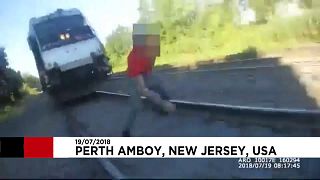 New Jersey police officer Kyle Savoia saved a man's life last week and it was captured on the officer's body camera. He has been on the job for just six-months and he may have already experienced his best day ever.

Last Thursday, the officer was dispatched to do a welfare check on someone who was apparently on the railroad tracks in Perth Amboy, New Jersey. When he arrived the man was lying down on the tracks so the officer made a mad dash for him, while also screaming to get his attention.

Officer Savoia also waved his arms to get the train conductor to stop the train.