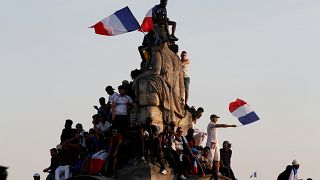 Fans welcome their World Cup champions on the Champs Elysees

France's national football team were welcomed as heroes by thousands of fans gathered on the Champs Elysees on Monday.

Cheering and dancing on an open-top bus driving on the French capital's most famous avenue, 'Les Bleus' then made their way to the Elysee palace, where they were greeted by French President Emmanuel Macron.

'Les Bleus', a dynamic, young team that won a fast-paced final with Croatia in Moscow by 4-2, brought home the second World Cup for France, 20 years after their first victory in the championship in 1998.