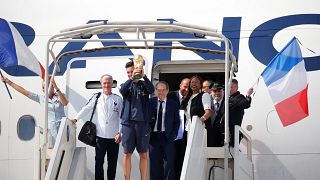 Les Bleus touch down in Paris for victory parade

France's soccer team touched down at Charles de Gaulle airport in Paris on Monday ahead of a victory parade down the Champs Elysees in front of crowds who queued to welcome the World Cup heros.

Team captain Hugo Lloris was first off the plane brandishing the trophy and greeted by airport staff before a team photo on the tarmac.

Les Bleus were then headed to Paris where they were expected to parade in an open-top bus to the Elysee Palace where French President Emmanuel Macron was to hold a reception in their honour.