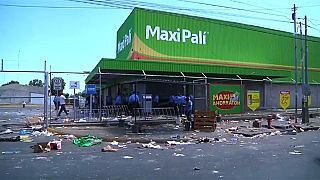 Shops were looted in Managua after protests against government pension cuts spread across Nicaragua.

Eight people have been killed since the unrest began last Wednesday.

On Sunday Nicaraguan President Daniel Ortega said the planned overhaul of the welfare system had been cancelled. The protests in Managua then died down considerably.

Some protesters have demanded Ortega resign and the unrest has posed the biggest challenge to his leadership since he was elected president for a second time 11 years ago.