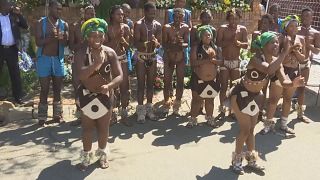 Ambassadors from dozens of countries arrived to pay their respects at the Soweto home of the late Winnie Madikizela-Mandela on Tuesday.

The South African anti-apartheid activist and former wife of Nelson Mandela passed away last week after a long illness, aged 81.

A traditional dance group performed outside Madikizela-Mandela's house singing and dancing in tribute to the woman seen by many as the "Mother of the Nation."

A memorial will be held for Madikizela-Mandela at the Regina Mundi Catholic Church in Soweto on Wednesday, and her funeral will take place at Soweto's Orlando Stadium three days later.