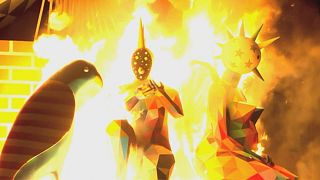 The city of Valencia ended its annual festival, known as Las Fallas, with the traditional 'crema', the burning of all the giant sculptures which had been displayed for almost a week in many streets of the city.

Huge bonfires at midnight mark the end of the five-day festival that was added to UNESCO's intangible cultural heritage of humanity list on 30 November 2016.

The UK's Queen Elizabeth visited the Royal Academy of Arts in central London on Tuesday to mark the completion of a redevelopment at the institution that will include a new art exhibition.

During her visit Queen Elizabeth met people involved in the construction of the building. She also unveiled the first painting to be installed in the new space and a plaque dedicated to her.