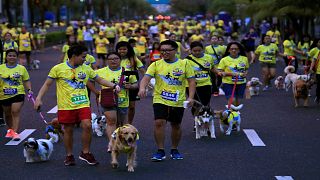 Nearly one thousand pet lovers and their dogs took part in an annual fun run in Manila on Saturday .

Dogs and their owners ran races ranging from 1.5, 3 and 5 kilometres around an entertainment district in the Philippine capital. Some pairs finished in under 20 minutes while most dogs walked or had their owners carry them to the finish line.

Philippine army soldier Crisenyano Yaban, who won the five kilometre race for the third consecutive year, said the key to winning is being in sync with one's dog. He and his three-year-old Labrador, who also received brief military training, finished the race in around 20 minutes, five minutes earlier than their record in 2017.

Admission in each of the three races costs around 10 euros, a part of which is donated to the rescue shelter of the pets' rights group Philippines Animal Welfare Society.