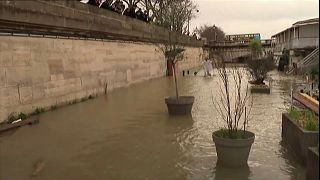 The Seine River has risen to its maximum overnight from Sunday to Monday, (January 28 to 29), in Paris, and is expected to remain at the same level for about 24 hours before it slowly subsides, according to the flood information agency Vigicrues.

The water level stabilised at 5.84 meters, (19 feet), near the Paris-Austerlitz train station, below the 6.10 meters measured at the same place in June 2016 and well below the 8.62 meters reached during the historic flood of 1910.

The receding of floods could last about a week despite a lull in rainfall.

The seven train stops along commuter line RER C that include stations near the Notre Dame Cathedral, the Musee d'Orsay and the Eiffel Tower would remain closed until at least February 5th, the operator said.

Waters continued to rise downstream from Paris as well as upstream, but this should not affect the capital, according to Vigicrues. Eleven departments remained on orange flood alert, one below the highest vigilance level.