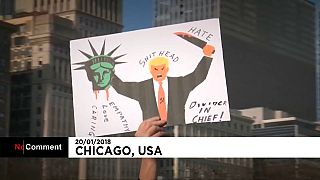 Thousands turn out for the second Women's March, a nationwide series of protests against U.S. President Donald Trump